This is page is all about the new content I will be posting on my YouTube Channel. Here you will be able to find information about the MOC, it's build and it's story details. 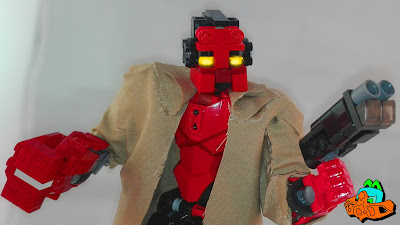 Video: Here
New content! It has been a while since I have last posted, but at last here is my Bionicle MOC based on the new reboot of Hellboy! I have been a casual Hellboy fan for some time now, but after I watched the newest movie for a second time, I decided to build Hellboy myself.

It was very fun to figure out how to build the head, but I think I did a pretty decent job at it. The Right Hand Of Doom is illegally connected using some Blu-Tack, but I wanted it to be as bulky as possible. The gun is not at all like the original, but I managed to make a loading mechanism, which uses a knockoff red axle as a bullet. The coat is made out of cloth and since I can't sew, I used hot glue. This MOC takes inspiration from all of different versions of the character, but I like to think that, that this is the Ron Perlman version of the character.

This MOC and video serve as an exaple for the Bionicle MOC Contest (Zanton's Cinematic MOC Contest), that I have created, and you can watch the announcement video  - here -. You still have time to enter, deadline is August 5th 2019. 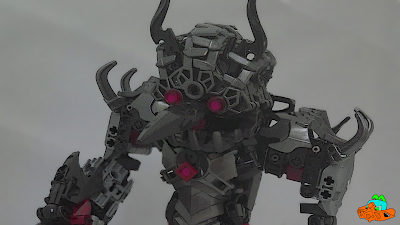 Pictures: Here
This is MOC was created for the Bio-Cup 2019 preliminary round. The round theme was "Scary Monsters" and when I started I had no idea what I was going to build. Then I played with the shadow traps pieces that came out in 2017 and everything else came afterwards.

In my story The Black Mummer is one of the many demonizer-antogonists. His purpose is to invade one's dreams, thoughts and most importantly - brain. He messes sh*t there, which unlocks different abilities and disadvantages for the person. Then the mummer leaves for 5-10 years and comes back to see his "creation". If the "creation" has failed a.k.a is dead and/or just suffers from pain and agony, the mummer eats it. If the "creation" has been succesful, then The Black Mummer adds it to his army of mentally/physically changed freaks.

He also plays a big part of Dalek's backstory (one of my main characters) by unlocking his Marvel Venom-like powers. 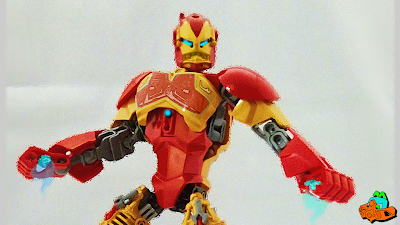 This is a litle tribute to the character that started the MCU. This MOC isn't really based of a specific armour, but I wanted to keep the traditional red and gold. There are some parts that are photoshopped like the chestplate, but the helmet is the Rocka 5.0 mask with some red acrlylic paint.

[Spoilers for Endgame]
Iron Man/Tony Stark has always been my favourite MCU hero, so I was really sad when he ended up dying at the end of Endgame. That's why I decided to build him. No, it's not a perfect representation, but it is something that can sit on my shelf and remind me of the awesome movie series that is the Marvel Cinematic Universe. 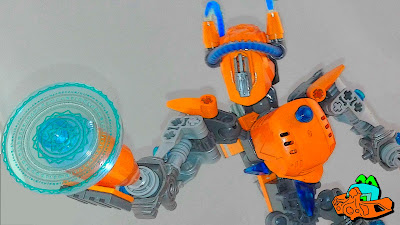 The Video: Here
A new MOC! This guy itn't really special. It orginally started with the idea of creating a Star Wars Like-Vehicle with very thin appendages. Then I went outside for a bit to do some work and when I came back I scrapped the idea of a vehicle and built this guy.

The name comes from a ancient roman creature - half a man, half a goat - Faun. I thought it was fitting, since he kinda looked like a goat in the head. Storywise this is a normal drone character at the "Government". Unfortunately he goes rouge, along side other drones, when a demonizer attack took place. He was offlined by Dalek. 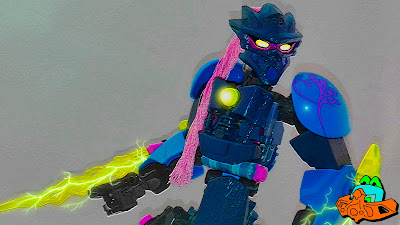 The Video: Here
This is my newest Lego Bionicle MOC! Celestia is my first creation that includes more than three painted pieces, since there are a very few parts that exist in this colour. I originally got inspired by one of Jayfa's MOCs (a creator on Flickr), which was dark blue and pink. The hair is made out of pink strings and the mask is KO, which a friend of mine gave me in return for a different mask. The torso is based on another MOC by Toaofultimatedoom, but heavily modified.

In my story, Celestia is the love interest of Peter and the cousin of Ace. She has mastered the element of eletricity, which is different from Peter's - lightning. Celestia wears a special armour, which allows her to use the two elements together, without her being in danger. 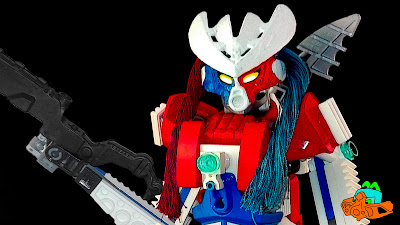 The Video: Here
This is my newest Lego Bionicle MOC! Originally she was supposed to be one of the main supernatural/super powerful characters in my story, but in the process of building I realised that I have no yellow 3 long CCBS armour shells and 4 long green technic liftarms. So I was left with only blue and red and decided to finish it to what kind of MOC it will turn out to be. The female body was done pretty well in my opinion, added red and blue hair and painted the mask. It turned out to be one of my favourite MOCs. The build is slightly fragile, but I mostly have my creations displayed, so I prefer them to be visually pleasing than to be solid.

When it comes to the story, Magneta's element is artificially created. Before getting in the ''Government'', she was a normal Ga-Matoran. She voluntereed for the "Fusion Programm" along side Exhaust (one of the main characters in my story). She is an excellent fighter and was also a formal member of Zanton's team - ''The Helds". She had a romantic relationship with Raxus, Knight Of The Sun, but because of an accident, which included a demonizer, they broke off.

Desparo, Ancient Of The Damned 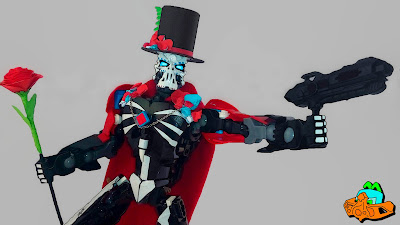 The Video: Here
This is my newest Lego Bionicle MOC! It was created for BioTuber ThatchMac's Heir To The Holidays Bionicle MOC Contest. Customizing parts was allowed, so I went crazy with it to better capture the Day Of The Dead holiday. He uses a ton of handmade stickers, flowers made out of paper, a cardboard hat, cape made out of an old T-Shirt, a broken necklace and more paper to make the custom rose he holds. Custom painted mask is also included. The gun is a KnockOff and he has a bier bottle with the name "Alestorm", which is reference to a metal band of the same name.

In my story, he is one of the Demonizers, which are the bad guys. If I win ThatchMac's contest, my MOC will get a cameo apperance in a later episode. 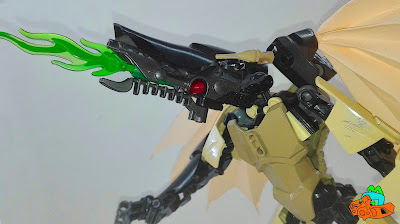 The Video: Here
This is my newest Lego Bionicle MOC! It is an interpretation of one of my Friend's MOC - Hardfang. We decided to have a little crossover. Some of his characters would visit the Zantonverse. And hardfang was on of them. I decided to make him bigger, but still wanted to keep the head, which is an illegal connection, but it's very sturdy. The wings are made out of paper. This is not my best work, but in my opinion it is still a decent MOC nonetheless.

In my story, HardFang is, like a said, a character, who came from another dimension. He is one of Ace The Otherworld King's servant. He is able to spit out "Toxic Fire", which is one of the elements from my friend's universe. It's the same kind of fire, that Echo's weapon is able to produce. For the record, it took Echo two years to create this type of "weapon", even though it is pretty common in HardFang's dimension. This dragon also possesses metal claws on his fingers. 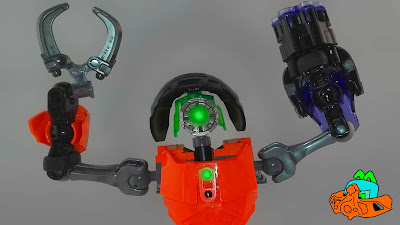 The Video: Here
This is my newest Lego Bionicle MOC. It is an interpretation of another Lego Bionicle Youtuber (BioTuber for short) - RenzoMOCs. This build combines system pieces with traditional CCBS parts. The left hand is reference to one of RenzoMOCs' own series (RENZO) - it's the purple gun that the main character gave to G-0de as a Christmas present. The chest piece is a KnockOff, which came in handy, while building this character.

In my own story, G-0de is recurring character. He is part of Jens' science-team, which includes Echo (on of my main characters), Jens, G-0de and two other characters. He has a rank of a "Knight" and "Medic". He does not possess any elemental powers. His typical tools/weapons are his "Protodermis Claws" and his "The Gift". Additional accessories - "Plasma Jetpack". The Video: Here
A new MOC! I present you my second entry for Renzo's Bionicle MOC Contest "Protectors of the big space" in the ''villain' category. I didn't really have an idea when I sat down to build her., but I knew I wanted to use gold and transparent dark-red pieces. I also wanted wanted to use the 2015 skull-basher armour piece for a chest. The hair is made out of red strings, which are going out of the ''mouth'' of the Rocka 5.0 head. The little antenna is stuck in the ''eye hole'' with friction.

Storywise, DAtA is one of the commanders of the ''Government'' alongside The Rahi Commander, The Granite Commander and more. When the demonizer attack took place, DAtA was being controlled by Agony, a henchwoman of Raksäßa, The Skull Commander [rouge anarchist demonizer - later explanation will be created]. She was offlined by Avaria and Zanton, but Agony managed to escape. 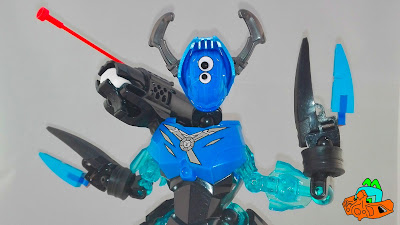 The Video: Here
This is my newest MOC - Nix, The Spooder. He was created for RenzoMOCs' Bionicle MOC Contest "Protectors of the big space" in the ''hero'' category. This guy is suppose to be goofy and scary at the same time. He is able to transform into a different creature. The head is built entirely using illegal technics, but the eyes are not lego pieces.

Unfortunately, he does not have a big role in my own story, because he was made to be characterised by RenzoMOCs in his Bionicle movie - "Protectors of the big space". Of course since I want every MOC that I have built since late 2017 to be cannon, he just a creature that The Helds encounter on a journey to somewhere.

[Edit]: I won third place with this MOC, which means that I will be able to voice him the movie! Hooray!

Good Guy as a G2 Protector 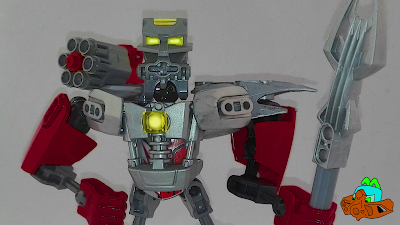 The Video: Here
Today I present you the best Bionicle character in a G2 form as a protector - Good Guy! I built this guy, because I had recently (mid 2018) rewatched the entirety of Suddenly Oranges's "Rviving Bionicle" series and I wanted to build something out of these films. At first it was going to be Voriki, but I dropped the idea, because I pretty much no purple pieces, so Good Guy was the other plan. I also wanted to build Good Guy '08, since in the movie they are buddies, but I realised that I did not have the mask I needed.

My idea was to have Good Guy in the G2 aestetic. I had built the body, when I found out that there wasn't any way to attach the metru head. So I ordered some pieces off Brinklink, cut them up and made a metru head with socket connection. People stll hate for that :P